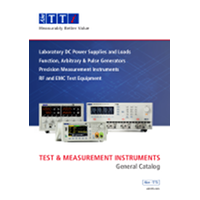 This zip file contains the firmware (.hex) files for version 1.05 of the firmware for  TGP3151, TGP3152, TGP3121 and TGP3122 Pulse and Universal Function Generators.  It also contains a PDF readme file with details on how to perform the upgrade.

Version 1.04 updates the USB stack to make improvements in the USB CDC communication.
Version 1.05 fixes a firmware problem which prevented both channels of dual channel units being triggered simultaneously via remote control

The current firmware version installed in the generator is shown when the instrument is switched on.